November 16, 2016
I was only a little surprised to read yesterday during my commute about fake news. About a month ago I saw an advertisement online titled "Bigger Than Snowden" someone actually paid money towards an online ad campaign to purport that electromagnetic weapons are being used by the government to covertly target, monitor, and torture victims. Seriously. The link above goes to  google search results and you can see how this nonsense has been smeared around the internet as if it's true. Which it's not.

Did fake news catapult It (I'm not saying It's name) into the White House? NYTimes seems to think so. And you know what, I think so too. As a User Experience designer I know how to pull the same exact tricks that creators of fake news pulled. Any of us web professionals could easily fool a lot of people with fake stories.

Then I was a little surprised to read today about a group of college students who already solved the fake news problem in a hackathon.

For months leading up to the election I was flagging content on Facebook. Content that was offensive but not technically abusive by Facebook's terms. There were a lot of mean, belittling, inaccurate posts that are designed to stoke people's anger (or fear) that are OK to post on Facebook. I saw people being really mean with an image composed of 2 photos, one of Michelle Obama and the other of Beyonce. This wasn't fake news. It's perfectly fine to put this on Facebook.  A lot of meanness and vitriol was cultivated about the Obama's on social media, and I didn't see the point of cultivating all this anger, until November 9th.

Frankly, it diminishes the User Experience of Facebook to visit the site and see a litany of angry memes. I like that Facebook let's me unfollow friends that are bothering me, but the flagging could be a lot more robust.


Google Needs to Make an Effort Too

The problem I am seeing in Google Search is pretty simple but still bad. Some of the more outrageous lies are spread via Google, sortof like it's algorithms have run amok and nobody's paying any attention to what they're doing. Here's what I saw and I brushed it off at the time. I'm trying to search for a popular news story, and the top result is something completely different.  The #1 result was coming back with some scandalous political YouTube post completely unrelated to my search.

Google started including comments on YouTube videos in their search results. So this enabled people to game google's search and get a piece of content like a YouTube video to appear on an unrelated search term.

It's against Google's terms of use to trick web pages into ranking higher in search. But it still works. Google is going to have a serious problem of scale on their hands if they allow this ecosystem of misinformation persist. I remember the ad-farms that used to pollute my search results in 2006, before Google tamped down on websites that were really only a collection of ads.  My search results are becoming polluted now, and again, this is bad User Experience and makes me want to use Google less.

I know Google has the capabilities to apply an extra layer of information to their search results to make it obviously clear that the content on that website is deemed fake. After all, here is the Denver Guardian, A fake news site. The way this site is presented in Google's search results makes it appear as if it's completely legitimate. This screenshot was taken today, November 16th, a day after the NY Times article called it out as a fake site. Here is Google giving the impression that this "FBI agent..." story is legit. 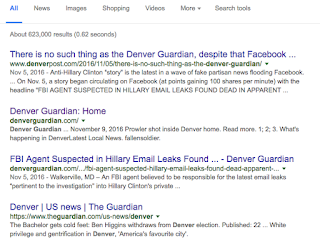 If Google is "Organizing the World's Information" I would have to give it a D grade. Does Google expect newspapers to fight back with stories??? If these tech companies don't fix these loopholes of misinformation, then rational normal content creators with suffer and we will all be poorer as a result.

Popular posts from this blog

January 08, 2020
About twelve years ago I didn’t really understand Climate Change but I was actually looking forward to it, sort-of like a good mystery I could become enthralled with.  At the time all I knew was I wanted a different lifestyle, and I thought, maybe Climate Change might make that happen? Maybe my life will actually be better because of it?  I had this fantasy about being a self sufficient bohemian gourmet, growing my own food harvested right in my yard. Mother Earth magazine seemed so bucolic. I wanted the opposite of my cramped apartment in San Francisco. In 2008 Climate Change was just an excuse to make changes, quit a job and move.   I moved East, close to my dad. I didn’t mention anything about Climate Change to my father, a total denier who was a meteorologist when he was in his 20s. There was no amount of practical data that would change his mind. He retired in ’93, with nothing to be stressed about so he simply didn’t care about anything but football, fishing and food.
Post a Comment
Read more

March 12, 2013
So... I'm on Pinterest updating a 'board' for my portfolio and I discover that other people have pinned my Experience Design Process graphic from my website. Apparently this graphic comes right up in Google Searches if you search on on Experience Design Process. Since the image on my site is small I'm re-posting the graphic here! Can anybody guess what this image was originally create for? I don't know what I was thinking about these colors! So what is going on here? In the middle of the graphic is a series of linear main steps to take in order to design an interactive digital product. The process starts with identifying a project's goals and ends with meeting those goals. In order to meet those goals you need to do some careful work... Surrounding the steps are a set of tasks (or methodologies) to perform in order to complete each step of the process. Over-arching the entire process are guidelines like "vetting" and "informed iteratio
Post a Comment
Read more

October 15, 2019
Every so often my husband will mention how he’s interested in becoming vegetarian. Yesterday he was telling me about Penn Jillette, the famous comedian from Penn & Teller. He had read how Jillette is now a vegan, saying with personal interest that Jillette said “he feels so much better now.” First I was perplexed, we are both Penn & Teller fans and as performers over the years Penn Jillette struck me as an unapologetic manly man, veganism seems totally at odds with his character. I also barked at my burger loving husband, “What would you eat if you became a vegan? What do you even like that’s vegetarian?” There was no reply because my husband leaves all the food decisions up to me and I am nowhere close to being a vegetarian myself.  I wanted to know more about this so I go online and Google ‘Penn Jillette Vegan’ and found this LA Times article ;  “At 6 feet, 6 inches and 330 pounds, he was hospitalized for his high blood pressure and a 90% heart blockage. Already taki
Post a Comment
Read more